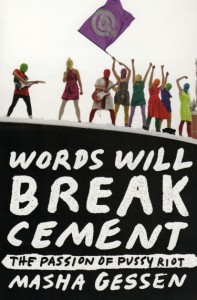 In 2012, Pussy Riot staged a performance in Moscow’s Cathedral. Dressed in their trademark, brightly coloured dresses and balaclavas, the women performed the song ‘Punk Prayer – Mother of God, Chase Putin Away!’ in front of the altar. The performance lasted only 40 seconds but it resulted in two-year prison sentences for three of the performers – and has turned Pussy Riot into one of the most well-known and important protest movements of the last five years. This necessary and timely book is an account of the Pussy Riot protest, the ensuing global support movement, and the tangled and controversial trial of the band members. It explores the status of dissents in Russia, the roots of the group and their adoption – or appropriation – by wider collectives, feminist groups and music icons.

Masha Gessen is a Russian and American journalist, author, and activist noted for her opposition to Russian President Vladimir Putin. Gessen identifies as a lesbian and has written extensively on LGBT rights and help founded the Pink Triangle Campaign. She has said about herself that for many years she was “probably the only publicly out gay person in the whole country.”