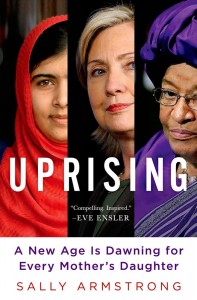 Uprising: A New Age Is Dawning for Every Mother’s Daughter, Sally Armstrong.

From mud-brick houses in Afghanistan to the forests of Congo, where women still hide from their attackers, to a shelter in northern Kenya, where 160 girls between 3 and 17 have won an historic court case against a government who did not protect them from rape, to Pakistan, where Malala Yousafzai is fighting for the rights of women everywhere, Uprising is about the final frontier for women: having control over your own body, whether in zones of conflict, in rural villages, on university campuses or in your own kitchen.

Human rights activist and journalist Sally Armstrong has covered stories about women and girls in the zones of conflict all over the world. Her eye witness reports have earned her awards including the Gold Award from the National Magazine Awards Foundation. She received the Amnesty International Media Award in 2000, 2002 and 2011, and she was a member of the International Women’s Commission, a UN body whose mandate is assisting with the path to peace in the Middle East.