Freedom of the press cannot be limited without being lost 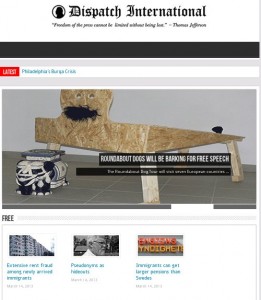 “Freedom of the press cannot be limited without being lost.”
– Thomas Jefferson

LONDON. Forty artists from around the world have got together due to their fear that the
West is in the process of abandoning freedom. Their exhibition Passion for Freedom in
London asks the question: Will our attempt to institute multicultural harmony pave the
way for a totalitarian society?

What is freedom? How easy is it to lose it? And how hard is it to get it back?
These are great questions which are not easily answered.
Even so, 40 artists from around the world are at the moment making an effort at the art ex-
hibition “Passion For Freedom” in London.

The fact that it is held in the British capital for the fourth consecutive year is not a coinci-
dence.
With the introduction of Sharia courts and a growing number of burqa-clad women on the
street, freedom is no longer a matter of course in the country that gave us the Magna Carta
and the Bill of Rights.

Freedom is something that is increasingly called into question.
It is also not a coincidence that several of the organizers behind Passion For Freedom are of
Polish / Russian origin. They have experience with more than liberal democracy.
“We know the totalitarian by its smell,” says Marianna Fox, a 27-year-old designer with roots in Russia.

Together with her co-organizers – among others the organization One Law For All – she
has worked hard for months to get the show up and running.
“We are concerned to see that so many people take freedom for granted. Too many doesn’t
realize how fragile it really is, and we would like to draw attention to this.”

She stresses that the exhibition focuses on all threats to freedom. Thus China, Cuba and
other states where freedom is in difficulty are subject of artistic treatment.
What many of the 40 artists have chosen to focus on, however, is not happening only under
distant skies. It is also happening in Britain, as well as in the rest of Europe.

Islam poses a threat to freedom that it is impossible to overlook, says Marianna Fox.
“Many of us who work with the exhibition know what it was like under communism. We
were young when it collapsed, but we recognize the fear and censorship that stems from Is-
lam today.

“We cannot just stand idly by while politicians restrict our freedom of speech and introduce
Sharia courts all over Britain. We have to say no. We have to insist on equality before the
law and the right for everybody to express their opinions freely. Otherwise we have learned
nothing from history, and we are likely to repeat it.”

That is a point with which the Iranian-born artist Azadeh Behroozi totally agrees.
Her painting illustrates the problem of the Muslim practice of covering of girls and women.
“With regard to religious tolerance, Sharia law is unfortunately tolerated many places in
Britain. But no matter what you refer to, Sharia always results in the suppression of the

rights of girls and women,” says Azadeh Behroozi.
She would like Britain to do the same as France – imposed a ban on veiling in public places.
“The veil is a symbol of oppression – a symbol that women are subordinate to men. As with

Sharia in general it should not have a place in any society – and especially not in a Western
society,” she continues, and apologizes that she does not want her picture taken. It’s too
risky, she says.

Another work of art that attracted much attention at the opening on November 3rd was nei-
ther beautiful or inspiring. It describes the cruel reality for many Muslim women.

The painting depicts a woman with an acid-damaged face. In one hand she holds a book
with blank pages – in the other a burqa.
The artist Amiri Hangama was born in Afghanistan – she now lives in Canada.

“It’s a 17-year-old girl I met on a trip back to Afghanistan. After 2001, when the Taliban
were driven out, she started going to school – that’s what the book symbolizes. Unfortu-
nately the Taliban returned shortly afterwards. They threw acid in her face, and she was
scarred for life. Today she is back under the burqa like many other Afghan women.”

Violence against women – or to be specific, female genital mutilation – is also the theme
that English-born artist Fiona Dent has taken up.
Her painting ”Madonna of Mutilation” depicts a woman with cut and sewn lips.

In the accompanying description of the painting the artist asks whether the British politi-
cians and authorities would wake up if every year 24,000 little girls had their lips cut off
and their mouths sewn together.

“The question is rhetorical; of course they would,” says Fiona Dent.
But it is obviously a different story when it comes to the more subtle cutting of female geni-
tals.

“London prides itself on being the capital of freedom,” she snorts.
“But as long as 24,000 young girls every year are being abused in this way, it is a very mis-
leading title.”

“Tolerance of such atrocities has nothing to do with freedom or humanism at all, it is a
crime – a crime against humanity,” says the artist, who through her job as a social worker
and using the available statistics, knows the extent of the problem.

She explains that the phenomenon is well known among doctors and nurses – not to men-
tion teachers. But political correctness gets in the way – no one dares do anything about it.

“In this country there has not been one a single lawsuit about this matter. It’s a terrible dis-
grace,” says Fiona Dent.