Rosenthal was given the Passion for Freedom Visitor’s Choice Award in October 2011 for his series, We do not have homosexuals like in your country. In our country we do not have this. In Iran this phenomenon does not exist. This work tells the story of two teenage boys, Mahmoud Asgari and Ayaz Marhoni, from northeastern Iran, who were executed for committing homosexual acts. The pictures themselves are, remarkably, constructed from the profile pictures from Gaydar profiles. Polari met Steve to talk about his work, and conducted the interview stood in front of a picture of the boys just moments before they were hanged. 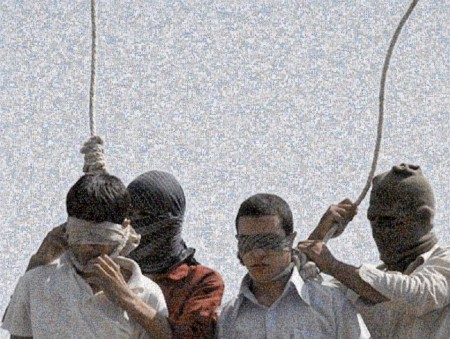 CB: When did you start out using Gaydar profile pictures in your work?

SR: I was quite a late joiner to the world of Gaydar. It wasn’t until January 2007.

When I set up a profile I wanted to create a log of every person who visited my profile, but I didn’t really know why. And so I started to build a catalogue of the images and strap-line text.

Then I was introduced to the program I use to make the pictures. At the time I had about 15,000 images, but the quality wasn’t that good. As the archive grew the quality of the images got better and better. So I had my Gaydar profile on all the time, and I was logged into as many chat rooms as possible, as I found that way you’d get more hits. It was on 24/7 really.

CB: At what point did you think it would provide the context for artwork? Was it when you were introduced to the program?

SR: To some extent, yes. I was initially just interested in the strap-lines, and I was intent on creating some kind of narrative by cobbling those together. But I realised it could be better to use the archive to comment on how we live, and how we communicate with each other. I decided I could use the archive to make an artistic comment on society and injustice.

The other series I’ve done with the Gaydar pictures, Mis-Leading Men, is about actors who have had a constructed ‘straight’ image. That was about using the catalogue as a subtext.

I was writing my dissertation about the demonization of the Arabic male, which followed the images that came out of Abu Ghraib. I was interested in why that sort of sexual degradation was seen as a pivotal power struggle. I came back to it with the pictures.

CB: Was it a natural progression to then take the Gaydar profile pictures and put them in this context? I’m specifically thinking of the image of Mahmoud Asgari and Ayaz Marhoni that we’re stood in front of now.

SR: The first series I started to work on was called Painting by Numbers. That was about adding a sexual subtext to works that, because of the time they were created, were restricted as to content, where the symbolism was there to  say what could not be said directly. It was about making them contemporary by adding the way we live now, and how we represent ourselves, to that.

So it seemed a natural progression to take it to the extreme where sexual liberty is not available and to have those two worlds collide. We are more able to represent ourselves as we wish, but if you go to one of the 7 countries that have the death penalty for homosexuality, or one of the 82 countries where it’s still illegal, that’s impossible. It’s very easy when we live in a society where we do have sexual freedom than to live in a society where you have that threat hanging over you all the time.

BF: You’re using images that some people would find shocking to make up the final picture, but what you find is that the final image, the image you see when you step back, is even more shocking. Do you ever get any comments from people who recognise themselves and their images? Do they find that offensive?

SR: When the work was shown at Flowers, I was contacted the day after by a model. He’d used a photo on his profile that he didn’t have the copyright to use. He was concerned about that, not appearing in the work, and that I exposed that breaching of an agreement with the photographer. He asked me if I could remove that image should I remake the work.

Again, you’re allowed to download any images from Gaydar and you’re not supposed to do anything with them. But this is about the idea of ownership and copyright and when you put your image on the internet how safe is that how much control do you have. You lose control immediately over what happens to it.

BF: The art is a political statement and you’re including all these people who will have many different political views. By including them, you’re essentially making them a part of your statement.

SR: I wouldn’t like to think I’m imposing, though. I haven’t chosen the images, its drawn from their profiles, and if people’s images are publically available then they helped form the archive. The program makes the choices when it’s creating the image.

People are fascinated by the variety of images that can be found here, and it’s not until you see them in quantity do you see how they fall into categories. There are the faces, the headless images – the body images, and the holiday pictures. The really sexual ones are normally headless and the others are pictures you’d show your Mum.

CB: It’s interesting to see something that seems so apolitical made political.

SR: Gaydar dangles the carrot of possibility in front of you, whether it’s a meeting or it’s sex, but to use that sexual freedom to highlight difference and injustice is a powerful tool.

CB: Or be placed within a larger narrative.

SR: Exactly. It’s very easy to live your life in a ghetto mentality, and feel safe and secure because of the numbers of men who are collected together. It’s easy to forget that many men do not have that liberty.

CB: So it’s about the ability to make a choice about yourself, and when you put that against an image that is about having choice taken away from you it does make the image really shocking.

SR: It’s a horrible thing to look at, and it’s sad that this has become an iconic image. Often iconic images glorify something. I don’t think this glorifies anything. The sequence of images catalogue the day, from when the arrived in an armoured vehicle through to various shots of them being noosed, to ones of them swinging. In some you can see the crowd that gathered. Just that idea of it being a spectator sport is very Life of Brian in a really twisted way, in that people would go out to watch a stoning or a hanging. We believe we live in a civilised world but actually a lot of it is still barbaric.

CB: What are your plans for continuing to work with the series of pictures made from the Gaydar images?

SR: As far as this series goes, I have a gallery interested in showing the Painting by Numbers series, possibily on a large scale. What I’d really like is to show the 7 Presidents, which shows the leaders from the countries with the death penalty, but it’s about finding somewhere willing to take on that responsibility

CB: Is that a problem, in your experience?

SR: Yeah. I’ve had interest from some serious collectors, but it’s not something you would necessarily have around. It’s too disturbing. Where are you going to put that? It could be in a museum or in a large private collection that’s open to the public.

It’s difficult because it points out things that people are not willing to talk about, that in countries run by Sharia law these things happen. But it’s not I’m anti-Islamic, I’m pro-liberty.

CB: It’s interesting that you even have to bring this up as a subject, that you have to say you’re not anti-Islamic.

SR: I think we become so conscious of not offending anyone. But I find the main image really offensive. I think you have to get beyond your own sense of offense and look at the big picture.